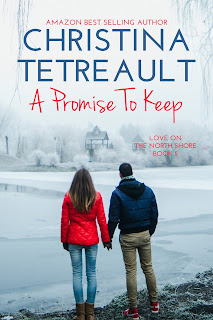 Following the deaths of her brother and then her parents, Kelsey Bancroft put her life and dreams on hold. Three years later Kelsey is still struggling financially to hold on to the last links she has to her family. She doesn’t need or want any distractions, especially not any distractions named Drew McKenzie. At the age of ten, Kelsey fell in love and decided someday she’d marry Drew, her older brother’s best friend. Although Kelsey long ago abandoned the silly fantasy, Drew has always occupied a special place in her heart.

The day before Ian Bancroft lost his battle with cancer, star quarterback Drew McKenzie promised his best friend he’d look out for his younger sister. Until recently, he assumed his monthly phone calls to Kelsey were enough. Now that he knows differently, he’s moved back to North Salem determined help Kelsey whether she wants his assistance or not. But just how far will Drew go to keep to keep a promise to his best friend?

Posted by christina at 11:58 AM No comments: