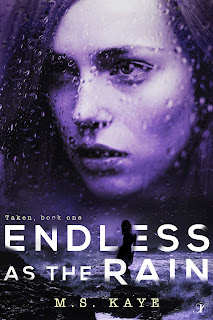 For Adriane Graham, the real question comes down to this: “Am I Alec Kaden’s guest…Or his prisoner?”
If she’s a guest in the Kaden mansion, then it means Alec has freed himself from his family ties to organized crime. It means he’s telling the truth when he says he’s protecting Adriane from dangerous men and they can shake off the shackles of haunted pasts.
…But…
If Adriane Graham is Alec Kaden’s prisoner, it means his tenderness is simply a ruse to keep her under control; his kindness is just poisoned hypocrisy. It means Alec is a cruel liar, and that somehow, by some desperate way, she’s got to get out of this charming man’s well-guarded house before it’s too late.
Is she Alec’s treasured guest? Or merely a pretty bird, trapped in his gilded cage? The troubling questions pour like fountains…flowing…

I looked around to see a black sedan creeping up behind me. I moved to get out of the way, barely on the gravel. I kept walking and vaguely appreciated that the driver didn’t speed by in impatience and kick up dirt and rocks. The car continued at the same careful pace

Just as the passenger door was at my arm’s length, the car stopped. I guessed the driver must be seeking directions, and waited for a window to roll down. They had to be lost. I’d never seen an unfamiliar car on this road. It was only used or even known about by old residents of the neighborhood.

The back door opened, and a man stepped out.

I caught a glimpse of his tailored suit and overly straight posture as I glanced around, deciding if I should keep walking, walk quickly...or bolt into the trees toward one of the houses.
“It’s getting late,” he said. “Would you care for a ride home before it gets too dark?”

His voice—it sounded vaguely familiar. As I looked at him properly, part of my mind was distracted. His skin was like white marble, sculpting a beautiful face, but hard, unchanging, unyielding. Except his eyes. They were puddles in the stone, the only gentle thing about him.
I stepped back.

He lurched forward and grabbed my arm just above my elbow.

M.S. Kaye has several awards and published books under her black belt. A transplant from Ohio, she resides with her husband Corey in Jacksonville, Florida, where she tries not to melt in the sun. Find suspense and the unusual at www.BooksByMSK.com.
To receive news on upcoming releases, sign up for email updates on her website.
Facebook  |  Twitter  |  Google+  |  Goodreads  |  Amazon  |  TSU  |  Pinterest  |  LinkedIn